Dealing with a bully a PATH to effective self defence

November 05, 2018
When you consider self defence and martial arts, the first thought normally leads to developing physical skills to deal with potential attacks.  Indeed the reasons many people take up a martial art is to improve confidence in dealing with difficult situations whether that relate to bullying; walking home from work on a dark night; or feeling intimidated by people around you.

The bad news is that it will often take 4 years for an individual to reach a black belt level in a martial art, and the first dan or degree will often be described as the belt wearer progressing from a novice to a "beginner" in their chosen discipline.

The slightly better news is that there are some basic physical skills which can be learnt fairly quickly which will stand you in good stead for a wide variety of situations.

The great news is that the best way to build yourself defence skills is to understand how to deal with difficult situations without relying on physical skills.  Granted, all martial ar…
Post a Comment
Read more

Taekwondo - an effective form of self defence


1. Introduction
There is as much need to develop confidence in today's younger generations as there has ever been, if not more so. The speed at which the world operates, the speed at which messages, opinions and accusations spread around schools, workplaces, towns, and cities is immense, such is the power of the internet.
It's no surprise therefore that the scourge of bullying continues to thrive. This combined with a growing wave of unprovoked attacks in cities, train and tram stations means the need for self defence is greater than ever.
Those deciding to take some action to develop self defence skills will be confronted with a range of different options. When my kids were growing up we landed ultimately on Taekwon-do.
However, when reading the internet today you could be forgiven for thinking that most martial arts are generally ineffective in self defence situations. In short the martial arts are charged with being …
Post a Comment
Read more
August 19, 2018
FITNESS THROUGH YOUR AGES
After several attempts and gyms, running clubs and so forth I finally discovered martial arts.  Initially in the form of Karate and then following a house move a with into Taekwon-do.  I have now enjoyed a continuous period of 12 years training in Taekwon-do twice a week, and have been motivated to do other activities such as cycling to improve my fitness for Taekwon-do.

My first introduction to Taekwon-do was driven by my kids desire to become the next Power Rangers.  They were 8 and 10 at the time and I was 38, each of us took different benefits from our Taekwon-do training.

My youngest son is a keen footballer but no so confident away from the football field - with Taekwon-do his flexibility improved, helping his football and his self defence abilities developed giving him confidence around his peer group.  As a consequence he was able to carry himself in a way which basically eliminated bullying without the need to actually draw on any Taekwon-do skills. 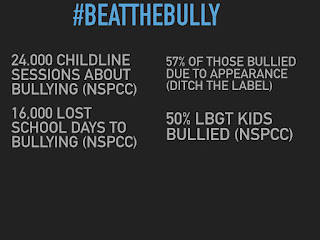 Returning to school after the summer break ought to be an exciting time for kids. A time to catch up with friends, embark on the next stage of life's great journey, and start to achieve those dreams and ambitions. Above all else to have some fun in a friendly and supportive environment.
However, as the statistics show this isn't always the case since the age old problem of bullying continues to be prevalent in today's society. Indeed, with the establishment of social media, the opportunity for bullying has increased not diminished.
Bullies feed off our own insecurities and so it's little wonder that the typical targets for bullying are those who don't necessarily fit into societies norms. Indeed the number 1 topic for bullying is appearance. Kids who identify as LBGT are more likely to be bullied than any other category of individual. Other factors such as kids changing schools, having different accents and such like are also likely to make them a target…
Post a Comment
Read more